CRPS can evolve in 3 phases:

The evolution between these 3 phases is variable in duration and can be very long or not exist (passage to phase 2 directly for example).

– Spontaneous and induced pain, severe and intense.
– Increased sensitivity of the skin to touch and light pressure (hyperesthesia).
– Localized edema, muscle cramps, stiffness and limited mobility of the affected joint.
– The skin is usually hot, red, moist and shiny, there is an increase in sweating. 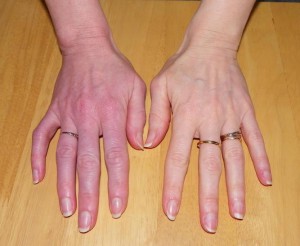 – Spontaneous pain becomes less intense but more severe on mobilization, more diffuse.
– The skin takes on a bluish (cyanic) appearance and may become cold.
– The edema tends to spread and can change from a rather soft type to hard.
– The hairs may become thicker but not numerous.
– The nails become brittle, cracked and present important furrows.
– Amyotrophy (muscle wasting) is observed.

– Tissue atrophy sometimes becomes irreversible associated with tendon retractions and/or joint capsules resulting in vicious attitudes and clear limitations of joint amplitudes.
– This phase is by no means mandatory and can be prevented by physiotherapy.

The limit between these 2 forms is not clear.

Very poorly known. Probably a dysregulation of the peripheral nervous system (nerves) but also central (spinal cord, brain). This deregulation is variable depending on the patient and gives very variable forms of CRPS with predominantly muscular forms, predominantly neurological forms or even purely central forms (rare) with complete paralysis of part of a limb.

To make the diagnosis it is recommended to use the Budapest criteria (Lille Recommendations, SFETD Congress 2017):

4 categories of symptoms and signs :

The diagnosis of CRPS can be confirmed by:

In the event of failure of the treatments and in particular of the locoregional anesthesia, the doctors must carefully seek a cause of treatable residual pain which maintains the CRPS…