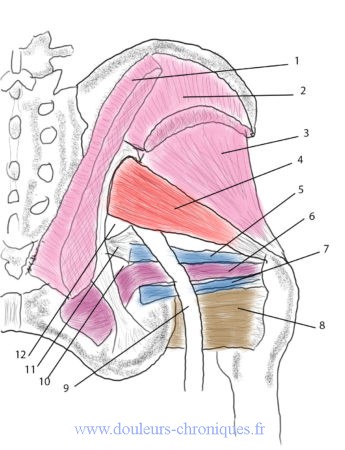 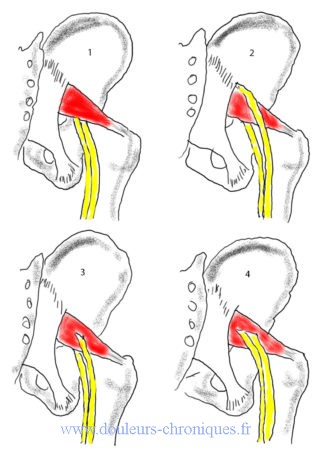 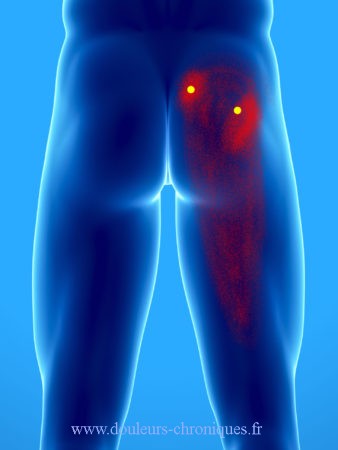 sometimes the pain may radiate into the inguinal fold and the coccyx. Visceral pain is sometimes described with pain in the rectum during defecation.
Symptoms are aggravated by sitting. Sexual disorders are also described with dyspareunia in women and impotence in men.

The appearance of the myofascial syndrome of the piriformis is favored by the position of the knees apart for a prolonged period (gynecological or urological surgery for example, coitus, etc.)
Standing with repeated rotational movements of the pelvis can also trigger this syndrome.
This syndrome is also favored by body asymmetry:

The pain related to nerve compression more or less frankly reproduces sciatic topography pain: buttock, posterior part of the thigh, posterior and lateral part of the leg, foot. Sometimes this attack manifests itself through ataxia (affecting the deep sensitivity of the sciatic nerve). The topography of the sciatic attack can be variable, depending on the local anatomy of the piriformis and the sciatic nerve (see the anatomical diagram above)
Anatomically the pudendal nerve is very close to the sciatic nerve at the level of the ischial spine. Compression of the latter is also possible with related neuralgia of the pudendal nerve.

The examination of the patient looks for painful points on the path of the piriformis. A test in a seated position where the patient tries to spread the knees against resistance can reveal a unilateral weakness of this gesture.
The patient in supine position presents a spontaneous external rotation of the foot of more than 45 degrees.
The patient in lateral decubitus hip flexed at 90 degrees tries to lift his knee against resistance. The gesture is difficult, it can reproduce the patient’s pain and sometimes reveals sciatic involvement (symptom of sciatica)

Stretching is performed in lateral decubitus, hip flexed with a downward movement of the knee towards the plane of the table

Sometimes, in cases of nerve compression, decompression surgery is helpful. Tests by infiltrations under scanner can make it possible to specify the attack to see to make the treatment.

The patient presenting this syndrome must, if he sleeps in lateral decubitus, place a cushion between the two knees which limits the tension of the muscle and avoids “difficult nights”.
Likewise, during physical activities (work, gardening, etc.), he must avoid repeated or blocked lateral trunk rotation positions.

The internal and external obturator muscles

The subject of these muscles is covered in “Myofascial Syndrome of the Pelvic Floor Muscles”.

The gastrocnemius and quadratus femoris muscles