These pains of muscular origin are encountered daily by doctors but are unfortunately poorly understood or ignored. However, they are responsible in some patients for major and disabling functional impairment.

The International Committee of Anatomical Nomenclature of Bern references 200 pairs of muscles in the human body. Each of these muscles can develop myofascial syndrome and be responsible for pain referred away from the muscle. That is to say the number of different pains of possible muscular origin.
Each muscle can have areas called trigger points or trigger points. These trigger points cause distant pain that has no neurological distribution. Trigger point pressure can trigger referred pain

Two American physicians, Dr. TRAVELL and Dr. SIMONS, have studied these syndromes for many years and written a reference book on the subject. The descriptions of myofascial syndromes are partly inspired by their work. The site will be incremented little by little with new descriptions, starting with the most frequently encountered in clinical practice. 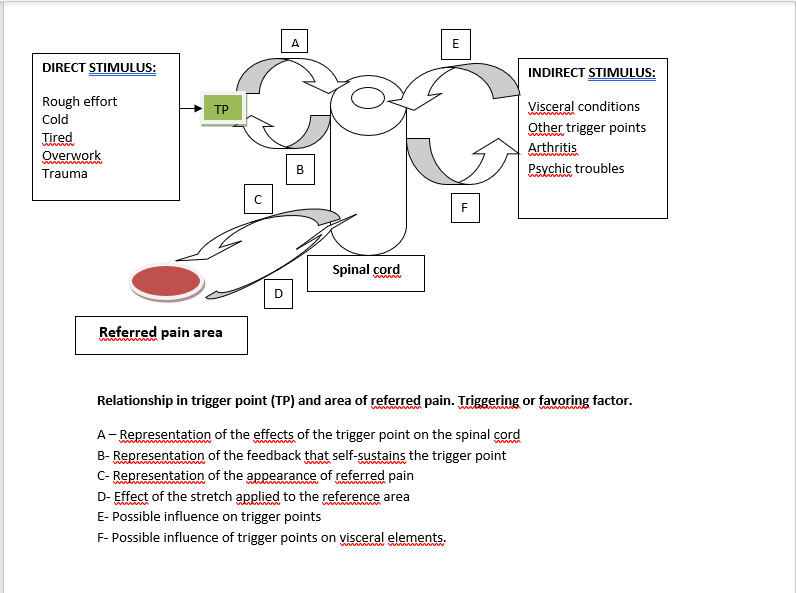 The referred or projected pain of myofascial syndromes is, in principle, dull and persistent. Its intensity ranges from simple discomfort to unbearable pain. It can appear at rest or simply during movement of the offending part. The pain described is not on a segmental route or a usual neurological route but it is located in a part of the dermatome corresponding to the myotome of the responsible muscle. The painful surface is often variable according to the painful intensity (the simple gene is often smaller in surface than the intolerable gene). This rule is often slightly modified because the notion of medullary convergence takes on its full value without this type of phenomenon.
In this diagram the supraspinal controls do not appear but probably play a variable role during the chronicization of the painful phenomena.